The Secret Guilt of a Special Needs Mom

I think I have this special needs mom role under control. I’ve carried this label around for almost 4 years since the day my youngest son, Wyatt, woke up paralyzed. What once seemed “special,” now seems “typical.” (Because you’re not supposed to say normal. I didn’t realize that until my son became “special.”) I’m used to a calendar packed with therapies, doctor’s appointments, and procedures. Medical equipment fills the empty corners of my house and spare closets are stuffed with medical supplies. My counter is consistently topped with medicine bottles and dirty syringes sit in the bottom of the sink. It’s my life, and it’s more amazing than I could have imagined. But out of nowhere it still grabs me. It’s not fear or anger that tightens its noose around me. It’s guilt.

Guilt is my secret battle, and it wrecks me.

So much guilt, over so many things.

I feel guilty for not doing enough for Wyatt.

Social media is amazing and awful all at once. It allows me to connect with thousands of families facing similar roads, but it also allows me to see all the things I’m not doing. I want so badly to take advantage of every opportunity available to Wyatt. I want to get him into every therapy program I can find. I want information about every clinical trial. I desperately want to discover the one thing that might bring a complete healing to him. Families move across the country to be closer to advanced therapy for their children. Parents quit their jobs and homeschool, all in effort to squeeze in more therapy time. Families fly across the ocean hoping for a miracle from stem-cell therapies, and I see it all from the comfort of my home.

I feel guilty for pushing Wyatt too hard.

Wyatt hates Monday because Mrs. Shirley makes him work too hard, and he hates Tuesday because Mrs. Veronica makes him work too hard too. He shouldn’t have to worry about working hard. Hard work isn’t meant for 4-year-olds, but it is all he’s ever known. He celebrated his first birthday in the hospital while having 4 hours of therapy each day. He’s spent 4 weeks living 12 hours away from home for the last 3 summers to get more therapy. It’s overwhelming when I put it all on paper. A big chunk of his childhood is going to be spent in some form or another fighting for recovery or simply working to maintain the status quo.

My heart shatters into tiny shards every time he cries because he’s missing school for more therapy or another doctor’s appointment. It’s not fair. On the worst days, I sit another room and listen to him cry through therapy and stop myself from running in and taking him home. Guilt sneaks in and tells me that I’m a mean mommy. Guilt tells me that I am stealing his childhood. Guilt tells me that I lack the faith for healing to come without all the earthly efforts.

I feel guilty for not giving my other children the attention they deserve.

Wyatt is the youngest of my three. He needs a lot of me, and I feel like there isn’t enough to go around. His older brother and sister, Jay and Austin, have missed out on so much. They scarified sports teams, vacations, and special one-on-one time with me. Each time I have to miss one of their school functions, I see the sadness in their eyes, and guilt rushes over me-. Guilt makes me feel like I’m playing favorites. Guilt tells me that Jay and Austin are going to resent me and Wyatt as they grow. Guilt tells me that I should be doing it all.

I feel guilty because Wyatt is thriving.

I watch as Wyatt rolls into school without even looking back at me. He is ball of energy just waiting to be unleashed. He’s funny, smart, and completely amazing. I realize it sounds completely absurd, but at least once a week, I catch myself feeling guilty that he has survived. I feel guilty that he is thriving. I know survivor’s guilt is a real thing, but I never expect it to hit me.

There isn’t any reason that my child should be thriving while theirs is struggling, and I feel guilty that I can’t fix it for them. I feel guilty celebrating when so many others can’t. I can’t pray enough prayers to make it all better for them, and guilt remains.

And guilt robs me of joy that life brings.

And ultimately, that’s what guilt does. It is a thief straight from the father of lies, and its intent is to steal our joy and cause us to question all that we know is true. Guilt is a relentless foe, and it will consume you if you let it. I often confuse guilt with conviction, but make no mistake about it, the two are not the same. Conviction leads to repentance and ultimately to hope, but guilt only leads to condemnation.

Guilt and condemnation lead us to a place where we try desperately with all our might to control the outcomes of all the situations in our lives. We start spinning our wheels to do all the things we deem necessary, and we end up utterly exhausted. Or worse, guilt causes us to simply throw our hands into the air and quit because we can’t keep up. And then guilt has accomplished its purpose to leave us exhausted and broken – exactly where the devil wants us.

But when I run to the Father, guilt loses its power.

When I run to the Father in desperation, broken by the belief that I am failing my children, He reminds me that I am free. I am free from condemnation and guilt. He is sovereign, and He picked me to parent my children for a reason. There is something I can give them that no one else can, and the more I know of the Father, the more I realize that He is what I really want to give my children. I want them to know the freedom He gives, and I can’t show it to my kids if I’m not living in it. My kids can’t see freedom if I’m walking around in the bondage of guilt.

My friend, throw off that guilt you have been carrying around. The Father took care of it on a cross, and in Him, there is no condemnation. Let’s live like it, even on the hard days.

“Therefore, there is now no condemnation for those who are in Christ Jesus.” Romans 8:1

Order Your Copy of "Love Him Anyway" Today

She is certain her blood is equal parts sweet tea, coffee, and dark chocolate. Abby has a passion for finding God in the hard places and longs to live out the Gospel. 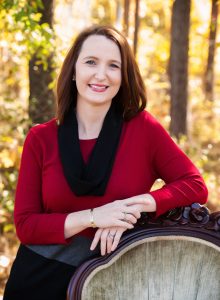 The Only Reason to Write a Book